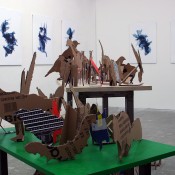 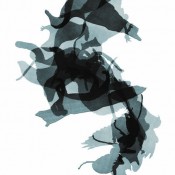 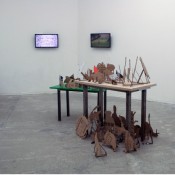 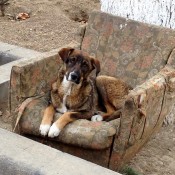 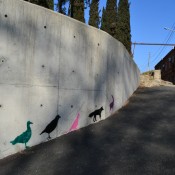 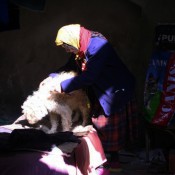 Promised Land took as its starting point the idea of our reliance on fixed and hackneyed symbols and their relationship to the world they are intended to represent. The installation in the Centre for Contemporary Art in Tbilisi combined sculptural, video and printed elements within a single room and by juxtaposing selected symbols and other non-symbolic material elements, the work set out to destabilise their appararent reliability inviting instead, readings of transient and shifting hybridity. A series of wall-mounted prints depicted assemblages of transluscent symbolic forms interspersed with silhouetted found objects.  A group of art students from one of the art schools in the City was enlisted to assist in locating local discarded materials, cardboard and furniture in the preparation of the central, sculptural component of the installation. Two video works explored the idea in relation to human expressions of discomfort in respect of unwanted interspecific intruders onto domestic premises and included a text work which, over a period of around 10 minutes by the gradual overlaying of multiple short phrases transformed the screen from black to (almost) white.

Promised Land questions the constitution of the interspecific outsider or ‘other’ within a dominant culture and the bases of acceptance or intolerance. The project considers how ecologies are identified or simply go unnoticed within cultures fixated on individual phenomena and their supposed fixed identity. It considers how the association or juxtaposition of material bodies form new and changing phenomena and meaning, irrespective of human agency or perspective. The project examines the concept of human fear and discomfort in the context of the familiar and how these conditions are manifest in unpredictable and disparate ways. As much as anything, through the deployment of an interspecific lens, the work tests how routine and familiarity, central to our subconscious may be disrupted and threatened sometimes overwhelmingly by marginal and persistent disruption, both actual and imagined.

The Fox Reports from Bryndis Snaebjornsdottir on Vimeo.

nightwatch from Bryndis Snaebjornsdottir on Vimeo.