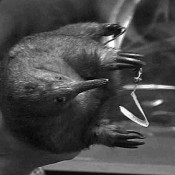 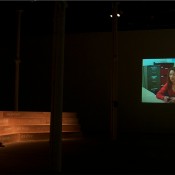 This installation by artists Bryndís Snæbjörnsdóttir and Mark Wilson used the example of the thought-to-be extinct thylacine to examine human behavioural response to the unfamiliar and to fear and how acts of identification by means of comparison with what is familiar can be culturally expediential and environmentally fateful and irredeemable.

In 1936 the last officially recorded thylacine died in captivity in Hobart Zoo in Tasmania, the country where they last lived wild and where over a sustained period they were systematically hunted to extinction by British colonial settlers.

It was recorded that this last animal was known by the keepers as ‘Benjamin’. However this has been proven to be something of a myth. This was actually the name of the last person officially to photograph it. On its death she was identified as female.

It is understood that the thylacine as a species was used as a scapegoat for poor returns on sheep farms in the colony of Tasmania in the 19C and as a consequence, a bounty was offered in return for dead specimens. It was by this means that the extinction of the animal was rapidly accelerated.

Importantly, the thylacine has taken on further significance for humans since its apparent extinction. It is currently used in all manner of ways as a focus for longing, for possible redemption, for a reacquaintance with the wild and what may remain there, tantalisingly and mysteriously still beyond our reach.

In addition to the above factors, the sheep’s ‘clothing’ here exoticises this most ubiquitous of ‘domestic’ animals, establishing it firmly as a target of human expedience at the same time as making us consider again its animal-hood. The signs (badmouth) are an embodiment of the kind of naming and commodification that announces and celebrates the existence of a thing and simultaneously divorces us from its reality. The zoomorphic seating platform offers the opportunity to view the installation in a way relating to other circumstances where the human gaze falls upon the animal.

Big Mouth ultimately, is not about a particular animal or animals. With this installation, as indeed in other projects, Snæbjörnsdóttir and Wilson have spotlighted particularly charged human/animal relationships in order to help unpack some of the myriad instinctive and cultured responses and projections prompted by our experience and understanding of habitat.