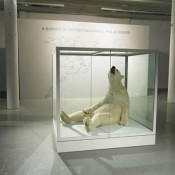 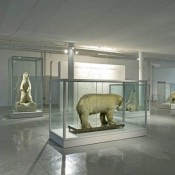 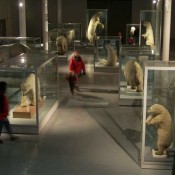 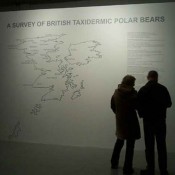 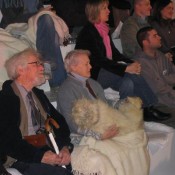 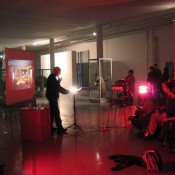 Between 2001 and 2006, artists Bryndís Snæbjörnsdóttir and Mark Wilson undertook a survey of taxidermic polar bears in the UK. They photographed each specimen – in storage, on display or undergoing restoration. They researched the histories of each and wherever possible identified the date, place and individuals associated with its death or capture.

The project was first shown as an installation at Spike Island, Bristol, UK in which ten polar bear specimens were shown, together with a wall drawing and a video of the preparation and transit of the polar bear specimens from their respective collections to the exhibition space.

As part of this project, the artists have an archive of photographs, each of which incorporates its provenance. The archive is available in editions of 5, at size 600 x 610 mm and of 3 (of selected images) at size 1100 x 1200 mm.  This collection of photographs has toured to over twenty zoological, polar and art museums in the UK and in Scandinavia. Two editions now belong respectively to Reykjavik Art Museum, Iceland and Nevada Museum of Art, U.S.A.

A publication entitled nanoq: flat out and bluesome, A Cultural Life of Polar Bears was published by Black Dog Publishing, London in 2006. The book  discloses the process of the survey and the subsequent installation of ten of the bears in Spike Island Gallery, a converted tea-packing factory. It includes essays by Michelle Henning, Dr Garry Marvin and Dr Steve Baker, who write about taxidermy and photography, trophy-hunting and the depiction of animals in contemporary art, alongside previously unpublished archival photographs of 19th Century bear hunting in the Arctic.